So we have been breastfeeding for 7 weeks now and I can honestly say it isn't as big of a deal as I thought it was.  My first son was really really bad at breast feeding.  He couldn't latch on or would do it wrong and I didn't know how to teach him and we both ended up pissed off.  I got out the breast pump and used that thing for 9 months.

When my second son was born I was determined we were going to get this right.  He latched on right after delivery and the nurses were all impressed.  I was thinking yeah well my other kid the same thing and we ended up attatched to the breast pump and I'm not doing that again.  So the whole time we were in the hospital Sam and I worked on breast feeding not that I had anything else to do but that's what we did.  Sam had some issues but nothing major, I think visitors were ammused at my little pep talks to Sammy as he tried to latch, "Come on now, this isn't new, get your hands out of the way."

Once we got home we still had some minor issues mostly just getting him to find the nipple and not his hands.  The important thing I realized was that this was never supposed to hurt.  With Max it hurt all the time every time and it made me dread feeding him.  I know I could have gone to a lactation consultant but I had already given up in my mind, and it freaking hurt anyway.  With Sam nothing hurt really, I could feel it but I can also sleep through it so its not bad at all.

I had been told give it two weeks and you can breast feed anywhere.  Well, I think for us it was more like a month.  When Sam was at the OB with me when he was first born I was all embarrassed that I had to breast feed in the waiting room.  As if I was the only one had ever breast fed there.  We had to go to the OB again today and I had no trouble feeding him in the waiting room.  The modesty fades with time I think.  Although when we were first feeding I was all about using the nursing shaw, now its like if you don't wanna see it don't look at it but Sammy needs to eat.

Their were a few things I had been told in the past that either arn't true or Sammy never read the book on the subject.  Things like nipple confusion where they can get confused between the breast a bottle and a pacifier.  Sam knew early on, if you suck on it and it fills you up keep sucking, if it doesn't spit it out.  Also he takes the breast and a bottle, also something not every baby can do I guess.  He on the other hand will drink from anything and not only that but I his mom, the one with the boobies, can give him the bottle. 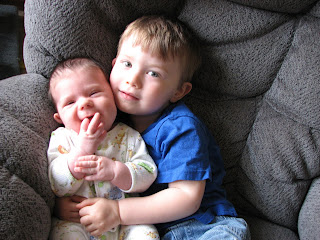 Actually its the day before Mothers Day but who's counting?  I became mother of tow six weeks ago yesterday.  On the last two Mother's Days I have been a little less likely to celebrate for my self but this year I decided I at least want something semi special like my favorite dessert.  German chocolate cake it is then.  I like having two kids, it makes me laugh at all my friends who have one baby and are over whelmed.  The even funnier part is I was over whelmed with one kid also.  Now I look at Sam and Max and think man it was easy when I only had one baby.  If it is the case that you grow more efficient with each additional child just imagine how efficient Michelle is of the Duggar family.
Posted by Heather Bowers at 5:20 AM 21 comments: