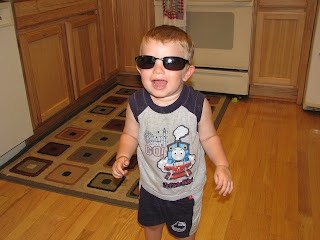 I have also noticed his preferences aren't the same as mine either.  When given the choice between Sheriff Woody and Buzz he chooses Buzz while I chose Woody.  Now this is important because I had to learn that I have to let him pick what he wants not what I want.  We were at my Aunt and Uncles Chirstmas party the other night and Max got what I thought was a really scary bionic man toy from Santa and was way above his age group.  I traded an older boy that "scary toy" for a caterpiller webkins stuffed toy.   Twenty minutes later the caterpilliar is on the floor and Max is chasing his cousin around the table with the scary bionic man.
Posted by Heather Bowers at 5:35 PM